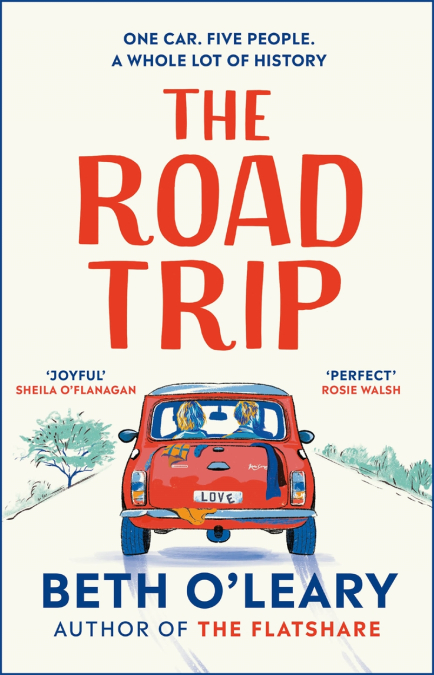 Addie and her sister are about to embark on an epic road trip to a friend’s wedding in rural Scotland. The playlist is all planned and the snacks are packed.

But, not long after setting off, a car slams into the back of theirs. The driver is none other than Addie’s ex, Dylan, who she’s avoided since their traumatic break-up two years earlier.

Dylan and his best mate are heading to the wedding too, and they’ve totalled their car, so Addie has no choice but to offer them a ride. The car is soon jam-packed full of luggage and secrets, and with four-hundred miles ahead of them, Dylan and Addie can’t avoid confronting the very messy history of their relationship…

Will they make it to the wedding on time? And, more importantly, is this really the end of the road for Addie and Dylan?

The Road Trip is such an entertaining, engaging, and addictive read. I became a fan of Beth O’Leary after reading The Flatshare, but now she is one of my favourite authors, one of these authors whose books I buy and read as soon as they come out, and I think that The Road Trip is her best so far.

Addie and Dylan had the perfect beginning of a love story, meeting in a villa in Provence where she worked as a caretaker and he was supposed to be on holiday with his family (who are substituted by his friends). They are immediately attracted to each other, saying “I love yous” after a few days and spending every night together. When the holiday is over, Addie goes back to England while Dylan keeps traveling with his best friend Marcus, but they keep in contact and continue their relationship once Dylan goes back home where things don’t go as planned…

Now they are both on their way to a wedding in Scotland, but they haven’t seen each other in two years, since they broke up. Crammed together in a Mini car with three other people, they have to face the feelings that they still have for each other.

I adored this novel. The story is beautiful, engrossing, and well-written. It alternates between the past, when Addie and Dylan met and got together, and the present, stuck together in a car to face their past and their problems. I really liked the characters of Addie and Dylan. They are fun, relatable, and authentic. In their early twenties when they meet, they are still trying to figure out what to do: Addie is about to embark in a new job, while Dylan is still deciding what to do with his life while being under pressure of his father’s expectations. While in Provence, they are happy together, forgetting their problems, but back home they have to face reality and their relationship.

While the story focuses on Addie and Dylan’s lives, there a few other characters that keep the story interesting and intriguing: Deb, Addie’s sister, is blunt, resourceful and hilarious; Marcus, Dylan’s best friend, is needy and a bit annoying, but I think he manages to redeem himself a little towards the end; Rodney, one of the guests of the wedding, who I found hilarious and a bit naive, but is actually full of surprises.

The Road Trip is an amazing read and it’s out next week so don’t miss it. Highly recommended!!!

A huge thank you to Quercus Books and NetGalley for providing me with a proof of the novel.

Beth O’Leary is a Sunday Times bestselling author whose novels have been translated into more than thirty languages. Her debut, THE FLATSHARE, sold over half a million copies and changed her life completely. Her second novel, THE SWITCH, has been optioned for film by Amblin Partners, Steven Spielberg’s production company. Beth writes her books in the Hampshire countryside with a very badly behaved golden retriever for company. If she’s not at her desk, you’ll usually find her curled up somewhere with a book, a cup of tea and several woolly jumpers (whatever the weather).

1 thought on “#BookReview: THE ROAD TRIP by Beth O’Leary @QuercusBooks”