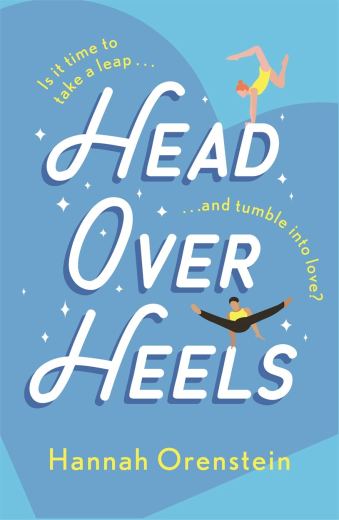 The stakes have never been higher – but is it time to take a leap, and tumble into love?

After training her entire life to make the Olympic gymnastics team, a disastrous performance ended Avery Abrams’ athletic career – for good. Seven years on, she’s still lost and, reeling from a breakup with her football star boyfriend, returns to her Massachusetts hometown.

In need of a job, Avery agrees to help new coach, Ryan Nicholson, train Hallie, a promising young gymnast with Olympic aspirations, despite her worries about the memories it will evoke.

Back in the gym, she’s surprised to find sparks flying with Ryan, and her long-buried love for her sport reemerging as she helps Hallie’s talent shine. But when a shocking scandal breaks, it has shattering effects on the world of gymnastics, Avery and everyone around her.

But Avery is not going to let history repeat itself – she’s ready to fight for those she loves – and win.

Head Over Heels is the new novel by senior dating editor Hannah Orenstein and it’s an entertaining and refreshing novel set in the world of gymnastics.

Avery Abrams, a rising star gymnast, had a dream: going to the 2012 London Olympic Games as part of the American team, but an accident put a stop to years of hard work and sacrifices. Seven years later, she leaves LA with no job and no boyfriend to return home to Massachusetts. She has no prospects or any idea what to do with her future, but then she is offered the chance to coach promising gymnast Hallie in the same gym where she spent most of her childhood and her teenage years training. In Hallie, Avery sees the same energy and ambition that drove her years ago, so she throws herself in helping Hallie getting to the 2020 Olympic Games.

This is a beautiful, thought-provoking, powerful, and at times emotional story about abuse, #metoo movement, and self-discovery. Avery fell into depression following the accident that prevented her from going to the Olympic Games and it took her years to get over it. She feels realistic and relatable and I liked how she develops and grows throughout the novel. Returning home and finding a new job not only gives her a new purpose in life, but also a new romance. I liked Ryan and Avery’s chemistry, even though there were a few times that I wanted to punch Ryan for his behaviour. I also liked Avery and Hallie’s relationship and I found myself invested in Hallie’s outcome almost as much as Avery.

Head Over Heels is my first novel by Hannah Orenstein, but I already have her previous novels ready on my kindle and I am really looking forward to reading them. If you are looking for a feel-good and engaging story full of romance, humour and with fantastic characters, then I highly recommend this novel!

A huge thank you to Headline Eternal and NetGalley for providing me with a copy of the novel.