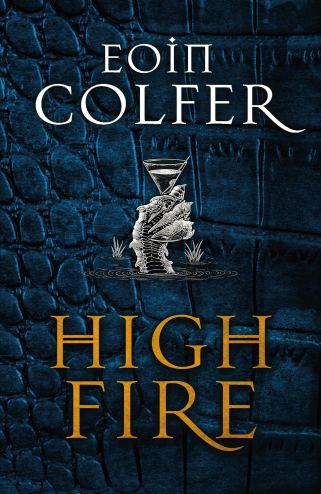 From the internationally bestselling author of the Artemis Fowl series: Eoin Colfer’s first adult fantasy novel is a hilarious, high-octane adventure about a vodka-drinking, Flashdance-loving dragon who’s been hiding out from the world – and potential torch-carrying mobs – in a Louisiana bayou . . . until his peaceful world’s turned upside down by a well-intentioned but wild Cajun tearaway and the crooked (and heavily armed) law officer who wants him dead.

Squib Moreau may be swamp-wild, but his intentions are (generally) good: he really wants to be a supportive son to his hard-working momma Elodie. But sometimes life gets in the way – like when Fake Daddy walked out on them leaving a ton of debt, or when crooked Constable Regence Hooke got to thinking pretty Elodie Moreau was just the gal for him . . .

An apprenticeship with the local moonshine runner, servicing the bayou, looks like the only way to pay off the family debts and maybe get Squib and his momma a place in town, far from Constable Hooke’s unwanted courtship and Fake Daddy’s reputation.

Unfortunately for Squib, Hooke has his own eye on that very same stretch of bayou – and neither of them have taken into account the fire-breathing dragon hiding out in the Louisiana swamp . . .

For Squib Moreau, Regence Hooke and Vern, aka Lord Highfire of Highfire Eyrie, life is never going to be the same again.

Highfire is a genre-bending tour-de-force of comedy and action by the million-copy-selling master storyteller.

I am delighted to take part in the blog tour for Highfire, the new adult fantasy novel by Eoin Colfer.

In the Louisiana swamp, Vern is hiding from the world and leads a quiet and depressing life binge-watching Netflix and drinking Absolut Vodka. Who is Vern? He is a dragon, probably the last one on the planet, and his only friend is an old Mogway. Until his path crosses with that of 15-year-old Everett Moreau, better known as Squib, and corrupted police officer Regence Hooke. From then on, his life will be far from quiet…

This is my first Eoin Colfer’s novel (I know… shocking!!!) and I loved it!!! Why have I never read any of his novels before? I enjoyed his sense of humour and the great characters he created. The plot is original and adventurous. It’s nothing at all what I expected and I can honestly say that I’ve never read anything like it.

The story is at times brutal and violent, but it is also funny, smart, and entertaining. The characters are well-developed. Vern is not your usual dragon. He is grumpy and angry all the time and he hates all humans. His friendship with Squib is unlikely and beautiful and I loved reading about it. Squib has been raised by a single mother and, no matter how hard he tries to avoid it, he is always in trouble, especially with local police officer Regence Hooke, an arrogant psychopath who is trying to turn the swamp in his own personal kingdom.

Highfire is poignant, thrilling, and addictive, a fantastic story that will make you laugh and will make you hold your breath at the same time. A must-read!!!

A huge thank you to Milly and Jo Fletcher for inviting me to join the blog tour and providing me with a copy of the novel. 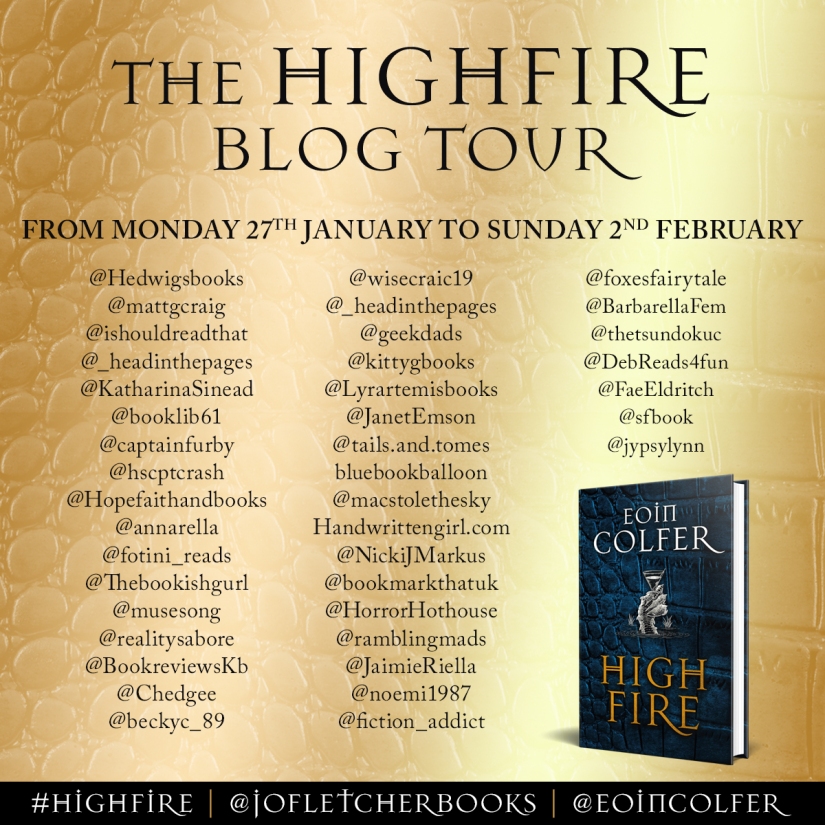 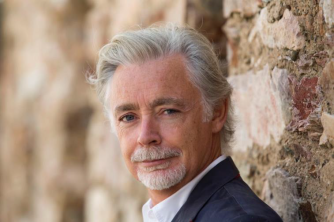 Eoin Colfer is the author of the internationally bestselling Artemis Fowl series, which has been translated into over forty languages. A Disney film adaptation will be released in 2019, directed by Kenneth Branagh and starring Dame Judi Dench. Eoin’s books have won numerous awards including The British Children’s Book of the Year, The Irish Book Awards Children’s Book of the Year and The German Children’s Book of the Year. Born in Ireland, Eoin was educated at Dublin University and qualified as a primary teacher, before turning his hand to writing in 2001. Highfire is his first adult fantasy novel.