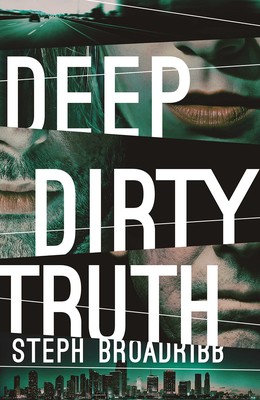 A price on her head. A secret worth dying for. Just 48 hours to expose the truth…

Single-mother bounty hunter Lori Anderson has finally got her family back together, but her new-found happiness is shattered when she’s snatched by the Miami Mob – and they want her dead. Rather than a bullet, they offer her a job: find the Mob’s ‘numbers man’ – Carlton North – who’s in protective custody after being forced to turn federal witness against them. If Lori succeeds, they’ll wipe the slate clean and the price on her head – and those of her family – will be removed. If she fails, they die.
With North due in court in forty-eight hours, Lori sets off across Florida, racing against the clock to find him and save her family. Only in this race the prize is more deadly – and the secret she shares with JT more dangerous – than she ever could have imagined. In this race only the winner gets out alive…
Brimming with tension, high-stakes jeopardy and high-voltage action, and a deep, emotional core, Deep Dirty Truth is an unmissable thriller by one of the freshest and most exciting voices in crime fiction.

I am so so happy Lori Anderson is back!!! I am addicted to this series and I am really thankful to Orenda Books and to the author Steph Broadribb for letting me be part of #TeamLori and for providing me with an advanced copy of the book which I read as soon as I got my hands on it.

The protagonist of DEEP DIRTY TRUTH is Lori Anderson. I liked this character right from the start, right from the first novel in the series Deep Down Dead. She is determined, fearless, smart, and loyal. A mother with a young daughter, Lori is a bounty hunter, travelling around the United States looking for fugitives to bring back to prison. However, in this third novel, she is the one with a bounty on her head. Lori’s happiness at playing happy family with JT and their nine-year-old Dakota is cut short by the Mafia mob who wants her to find someone for them in exchange for the lives and freedom of her and her family. But the job is not as straightforward as it seems and, in a race against time, Lori has to face not only mobsters, but also the FBI, and the alligators that live in the Florida Everglades.

The novel is fast-paced, thrilling and completely immersive. Lori is a very likable and well-crafted character, she is strong-willed, resourceful, and courageous and she is ready to do absolutely everything to protect her family. I like that, in this novel, the story is told also from JT’s point of view and we get to see more of this character. He is Lori’s mentor, the man she loves, the father of her child and, in the previous two books, he remained always a bit on the background, but now he has a more central role in the story and we get a better understanding of this character that I like more and more.

The author’s wonderful writing style and her great attention to details bring the reader right into the Florida setting with its heat, the dangerous alligators, and the sharks in the ocean. Gripping and full of tension, DEEP DIRTY TRUTH will keep you on the edge of your seat and, even though I think this is the best one so far, I am already looking forward to book number 4!