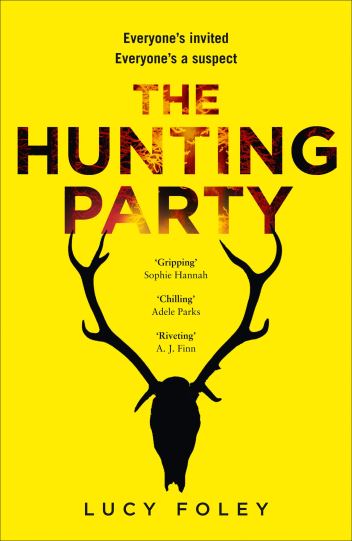 Bristling with tension, bitter rivalries, and toxic friendships, get ready for the most hotly-anticipated thriller of 2019.

In a remote hunting lodge, deep in the Scottish wilderness, old friends gather for New Year.

Not an accident – a murder among friends.

I heard so many good things about Lucy Foley’s new novel that I was really looking forward to reading it. My expectations were pretty high, as I read many positive reviews,  and I am happy to say that they were fully met. I was so immersed in the novel that I had trouble putting it down and I read it in two days.

A group of friends, a remote location, a snowstorm that stops everyone from getting in and out, a murderer among them, a suspenseful atmosphere worth of an Agatha Christie’s novel, these are all elements that make this novel twisty, compelling, and unputdownable.

The protagonists met at Oxford University ten years earlier and they have been friends since then. There is the golden couple, Julien and Miranda,  who has been together since college; there are the new parents, Giles and Sanita; there is Mark with his girlfriend of three years, Emma, the outsider of the group who would do anything to fit in with Mark’s friends; there is Katie, the single quiet workaholic friend; and there are Nick and Bo who are there just because they are friends with Katie. These nine people spend every New Year’s Eve together and this year, they have rented The Lodge, an exclusive house in the Scottish Highlands. Everyone is hiding something and when a body turns up, past jealousies, secrets and lies risk to come to light.

Told from different points of views and on two timelines (before and after the murder), THE HUNTING PARTY is a twisty and gripping novel. The characters are flawed and often not very likable. They are very well-drawn and jealousies, secrets, and tension between the group of friends is palpable through the pages. One of them is killed and one of them is probably the murderer and Lucy Foley does an amazing job keeping the reader in the dark about their identity and, despite the hints she gives here and there, I didn’t figure it out until at the end when it was all revealed.

I loved the setting the author chose for this gripping novel. A remote house, a beautiful winter landscape, snow everywhere, they all fit perfectly with the twisty and chilling plot of the novel and, thanks to the author’s attention to details, I could almost picture it in my head.

THE HUNTING PARTY is a riveting, captivating, and atmospheric read that will keep you on the edge of your seat, a well-written and gripping story that you won’t be able to put down and I’d like to thank HarperCollins for providing me with a copy of the book.