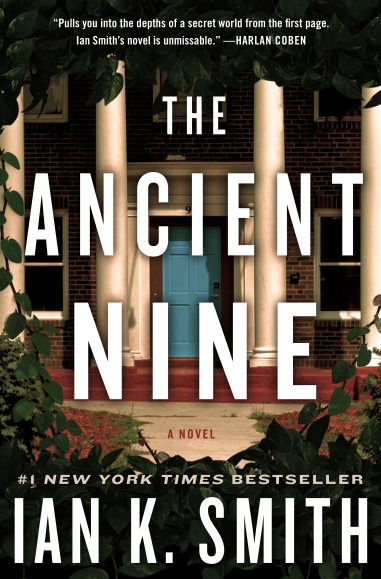 Spenser Collins
An unlikely Harvard prospect, smart and athletic, strapped for cash, determined to succeed. Calls his mother—who raised him on her own in Chicago—every week.

Dalton Winthrop
A white-shoe legacy at Harvard, he’s just the most recent in a string of moneyed, privileged Winthrop men in Cambridge. He’s got the ease—and the deep knowledge—that come from belonging.

These two find enough common ground to become friends, cementing their bond when Spenser is “punched” to join the Delphic Club, one of the most exclusive of Harvard’s famous all-male final clubs. Founded in the nineteenth century, the Delphic has had titans of industry, Hollywood legends, heads of state, and power brokers among its members.

Dalton Winthrop knows firsthand that the Delphic doesn’t offer memberships to just anyone. His great-uncle is one of their oldest living members, and Dalton grew up on stories of the club’s rituals. But why is his uncle so cryptic about the Ancient Nine, a shadowy group of alums whose identities are unknown and whose power is absolute? They protect the Delphic’s darkest and oldest secrets—including what happened to a student who sneaked into the club’s stately brick mansion in 1927 and was never seen again.

Dalton steers Spenser into deeper and deeper recesses of the club, and beyond it, to try to make sense of what they think they may be seeing. But with each scrap of information they get from an octogenarian Crimson graduate, a crumbling newspaper in the library’s archives, or one of Harvard’s most famous and heavily guarded historical books, a fresh complication trips them up. The more the friends investigate, the more questions they unearth, tangling the story of the club, the disappearance, and the Ancient Nine, until they realize their own lives are in danger.

When I read the blurb and I saw that it was about secret societies at Harvard I was completely sold. I have always been fascinated by student life in American colleges and I have been curious about student secret societies since I was a teenager and I saw the movie about Skull and Bones (with Joshua Jackson and Paul Walker).

THE ANCIENT NINE is set in 1988 at Harvard University. The protagonist is Stephen Collins a young student attending university. When he receives the invitation to join one of the Final Club (the most exclusive clubs at Harvard), Stephen, a black student from one of the poor neighbours of Chicago, is surprised. The Delphic is an ancient and the most exclusive club at the university, its members are some of the most powerful and richest men in the world, but there are legends and mysterious disappearances linked to the club. Together with his friend Dalton, Stephen wants to find out the truth around the folklore surrounding the club, but someone is watching him and wants to stop him.

I found the plot intriguing and exciting. The author enriches the story with an history of both Harvard University and secret societies that I found fascinating and detailed. The more I read the more I wanted to find out about these clubs. The mysterious side of the story is often nicely interrupted by Spenser’s basketball practice, his entertaining love life, and his friendship with Dalton.

I found Stephen and Dalton’s unlikely close friendship interesting. Stephen is a black kid from the South Side of Chicago, raised by a single mother. He got into Harvard with a scholarship and he has to count every penny he spends. On the other hand, Dalton is a white guy coming from a rich family, who flies everywhere and stays in the best hotels. Despite their different backgrounds, Stephen and Dalton’s friendship is true and honest and I was glued to the page as they joined forces to find out more about the Delphic club.

Exclusive clubs, mysterious disappearances, secret rooms, and fascinating legends kept me on edge as I kept reading. Well-written, informative, and completely immersive, THE ANCIENT NINE will take you on a journey through the ancient halls of one of the most important universities in the world and through a story that will keep you absorbed, page after page.

Ian K. Smith is the author of nine New York Times bestselling nonfiction books, several of them, including Shred and Super Shred, #1 bestsellers, as well as one previous work of fiction, The Blackbird Papers. He is a graduate of Harvard, Columbia, and the University of Chicago’s Pritzker School of Medicine.