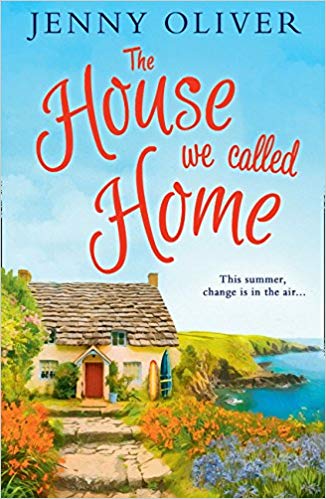 The house where Stella and her sister Amy grew up never changes – the red front door, the breath-taking view over the Cornish coast, her parents in their usual spots on the sofa. Except this summer, things feel a little different…

Stella’s father is nowhere to be seen, yet her mother – in suspiciously new Per Una jeans – seems curiously unfazed by his absence, and more eager to talk about her mysterious dog-walking buddy Mitch.

Stella’s sister Amy has returned home with a new boyfriend she can barely stand and a secret to hide, and Stella’s husband Jack has something he wants to get off his chest too. Even Frank Sinatra, the dog, has a guilty air about him.
This summer, change is in the air for the Whitethorns…

This novel is 400 pages long and yet I read it in less than two days because I was completely addicted. First of all, I loved the characters. They are engaging, realistic, and very very likable. There is Stella, who left Cornwall and the family home at eighteen after a fallout with her father and, since then, she has been back just for quick visits. Now she is a journalist with her own successful column about motherhood, even though she can’t seem to understand her teenage son, Sonny, who is a tech genius and seemingly very wise for his age. Her husband Jack does everything she asks and their younger daughter Rosie is adorable in her own innocence. Her younger sister Amy has always been the baby of the family with everyone taking care of her. Now, she is living in London on her own, trying to prove to her family that she can do it on her own, especially now that she is pregnant after a one-night stand. When their father suddenly leaves the family home without an explanation, both women travel to Cornwall to figure out what is going on, Amy followed by Gus, the father of her baby, and my favourite character with his wittiness and charm. Their mother Moira doesn’t seem too concerned by the disappearance of her husband. She finally feels free from being the wife of a man who demanded all her attention and, for once, she is thinking just about herself.

I really liked the author’s writing. This is my first Jenny Oliver’s novel (I really need to catch up) and I found her writing clear and distinct. The narration flows easily with the right amount of descriptions and dialogues, with hilarity, emotional moments, and a few twists. Each character has their own stories and a few secrets that entertain and kept me glued to the page because, just like the characters, they are realistic and engaging.

THE HOUSE WE CALLED HOME is a story about family, about forgiveness, and about growing up and I loved everything about it, from the first to the last page. It’s a compulsive and refreshing read and I’d like to thank HQ and Lily Capewell for inviting me to take part in the blog tour and for providing me with a copy of this immersive summer read.