Jess, a 29-year-old Londoner with a Kate Beckett fringe and a tendency for dramatics, gets taken on a surprise trip by her long-term boyfriend, Pete, to attend her best friend’s last-minute wedding in South Africa. Jess imagines sun, sand, wine and safaris. And returning to London with an ethically mined diamond on her left hand…

But this holiday isn’t set to be quite the fairy tale Jess has planned… Suddenly she finds her world tilting on its axis, and things are only set to get worse when Jess returns home…

Catherine Bennetto is back with her trademark wit and an equally hilarious cast of characters who will have you rooting for them from the first page.

After reading her first novel, How Not To Fall In Love, Actually, I was really looking forward to read more by Catherine Bennetto and I wasn’t disappointed because MAKE OR BREAK is a brilliant and completely absorbing novel and I’d like to thank Simon & Schuster UK and Harriett Collins for inviting me to take part in the blog tour and for providing me with a copy of  the book.

I laughed so much reading this book. If you are like me and you read during your commute, expect strange looks from people around you who don’t understand why you giggle every couple of minutes while reading a book.

Jess leaves for a holiday to South Africa with her boyfriend Pete to attend her best friend’s wedding and also to spend some quality time with Pete. But noyhing goes as planned, starting from the airport, and she also manages to antagonize the entire cabin crew during her flight. Luckily, not everything goes wrong and Jess not only finds new friends, but she takes the reader with her in her exploration of the beautiful African country: from music festivals to food markets, from safari to beaches with penguins walking and swimming around.

The protagonist of the novel is Jess. Let me say right away that I really loved this character. She is down-to-earth and funny. She has internal conversation with her wicked self and also with a dog called Flora. She is caring and selfless, spending all her free time helping her sister Annabelle to take care of her two young children. She suffers from anxiety and she sees the most dramatic outcome in every situation. The outcomes she comes up with are so funny that I can’t help but share some of my favourite: from poachers shooting her because, somehow, they mistake her for a rhino to her sister ending up in jail because Jess went to South Africa and nobody was checking on Annabelle’s 7-year-old son Hunter (probably) googling “how to make a bomb”. And let’s not forget a very disastrous butterfly effect in which a butterfly flaps her wings in Kent causing a chunk in Australia to break off and families to be divided and new maps to be drawn.

The characters are hilarious and very likable and the plot is completely entertaining. I laughed from the first to the last page and, even during some emotional scenes, the author manages to insert some humourism that is not out of order and lightens up the situation. MAKE OR BREAK is a refreshing, witty, and compulsive read and I am already looking forward to whatever the author writes next. 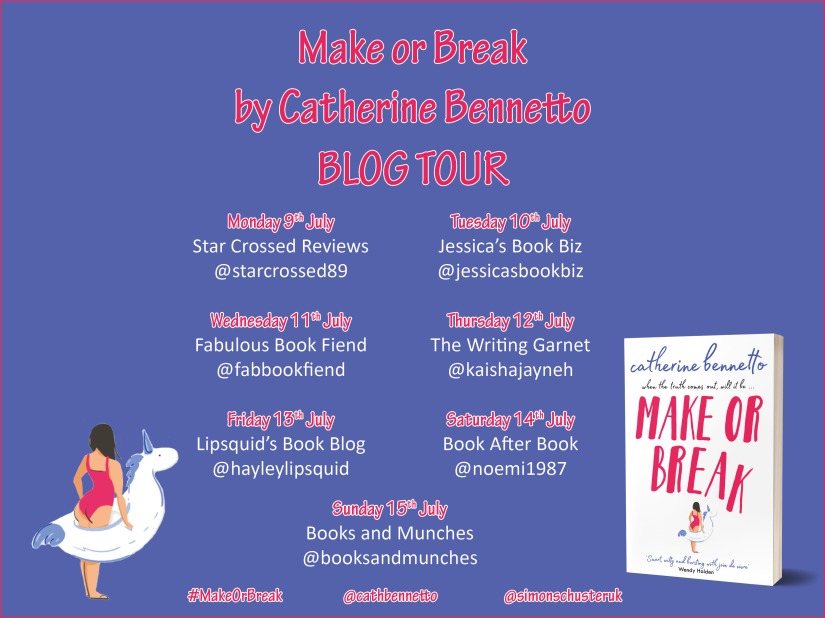 CATHERINE BENNETTO was born in New Zealand to a British father and Kiwi mother. She studied a variety of things at University, including Design and Biomedical Science, before settling on a career in television production.

Catherine, her husband and their two young boys have spent the past few years being permanent residents of nowhere – going where the work takes them. They’ve lived in Australia, England, the Caribbean, Hungary, Malaysia and South Africa, and have learnt some useful tricks for entertaining children along the way.

In 2013 she gained a place on Curtis Brown Creative’s inaugural online novel writing course. How Not to Fall in Love, Actually is her first novel.