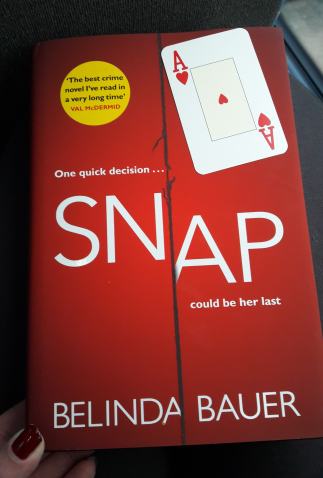 On a stifling summer’s day, eleven-year-old Jack and his two sisters sit in their broken-down car, waiting for their mother to come back and rescue them.

But she doesn’t come back. She never comes back. And life as the children know it is changed for ever.

Three years later, mum-to-be Catherine wakes to find a knife beside her bed, and a note that says:

I could have killed you.

Meanwhile, Jack is still in charge – of his sisters, of supporting them all, of making sure nobody knows they’re alone in the house, and – quite suddenly – of finding out the truth about what happened to his mother.

But the truth can be a dangerous thing…

I discovered Belinda Bauer a couple of years ago when I read her novel The Beautiful Dead. I loved the twisty plot, the captivating writing, and the way she creates and develops her characters. So when, a few months ago, I found out that she had a new novel coming out I was really excited and I couldn’t wait to read it, and I’d like to thank Transworld Books and Becky Short (who, by the way, was the one to send me a copy of The Beautiful Dead two years ago) for providing me with a copy of the book.

The story is told from three different points of view. The first is Jack Bright, a young boy who, after the death of his mother, had to grow up quickly and put himself in charge of his family. His father couldn’t cope with his wife’s lost, so, at fourteen, Jack has to take care of his two younger sisters, Joy, who spends her time piling up newspapers around the house, and Merry, the five-year-old who loves to read about vampires and scary clowns. Belinda Bauer really gets you into the head of this character, how he is overwhelmed by the fact that he has to take care and provide for his sisters, but, at the same time, he doesn’t want anybody to find out that they are left alone to not end up in foster care and be separated.

The other point of view is Catherine While, a happily married and seven-month pregnant woman who, one night, wakes up to find an intruder in her house. Her husband is away for work and she manages to scare the intruder away, but he left a message for her, a message that terrifies her so much that she doesn’t call the police or tell her husband.

You don’t have to wait long to find out the connection between Jack and Catherine and, while their paths cross multiple times, the police, in the meantime, is investigating a series of burglaries hitting the area around Taunton. The police’s investigation is narrated through the eyes of DCI John Marvel, an arrogant detective transferred from London who is looking for a big case that will make him look good to the eyes of his boss, and DS Reynolds, a know-it-all sergeant who always sticks to the rules. Although I didn’t really like these two characters, their exchanges created a few hilarious moments to the narration that made me laugh.

SNAP is dark and haunting, but also emotional, original, and gripping. I was completely absorbed into the characters’ lives and their tragic and moving stories. Once again, Belinda Bauer wrote a terrific must-read!