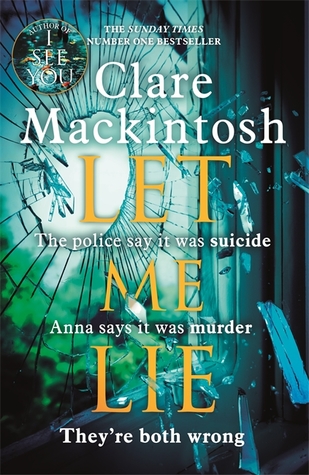 When I heard that Clare Mackintosh had a new book coming out, I was really excited because in the past year I have become a big fan of this author after reading her first two novels, I Let You Go and I See You, so I would like to thank Little, Brown for providing me with an early copy of the book.

The protagonist of LET ME LIE is Anna Johnson, a twenty-six-year old new mum. She and her partner Mark have a six-week-old daughter, Ella, and they live in her parents’ house that she inherited after her parents died a year before. First her father jumped from a cliff and then, seven months later, her mother killed herself from that same cliff. Now, a year later, on the first anniversary of her mother’s death, Anna receives a card that questions her parents’ suicide. Anna’s always found strange that her parents had killed themselves and this card seems to confirm her doubts, so she turns to the police.

Murray Mackenzie is a retired detective who works in the reception of the police station. He decides to help Anna and to investigate her parents’ deaths not only because, like Anna, he thinks that they look suspicious, but also to escape from his difficult situation at home. His wife’s Sarah battles mental health and she spends most of her time in a mental hospital.

The story is told from the point of view of Anna, Murray, and another unidentified narrator. I loved the use of multiple narrators, especially the unidentified one, who I tried to guess who it was – but I figure it out almost at the end –, because it makes the novel more suspenseful and gripping. I kept reading and reading because I wanted to know what was going on with the other characters.

The characters of the novel are ordinary people with complicated family dynamics. Anna is still grieving her parents’ deaths and, as a new mother, she especially feels the absence of her mother who she wishes had been there through her pregnancy. The author created a well-developed character in Anna and described in details her emotions, her grief, her guilt for keeping things from her partner Mark, and her confused feelings when she finds out the truth. But my favorite character was Murray Mackenzie. He goes out of his way to find out the truth, even if he risks to lose his job over it. Murray is a good person, he is patient, determined and diligent. He is going through a lot in his personal life and all I wanted to do was to hug him.

LET ME LIE is full of crazy twists. Just when you think that you know what is going on, something else happens that surprises you and then there is a shocking ending that I really didn’t see coming. It’s an intense, thrilling, and unpredictable novel about dysfunctional families, secrets, suicide, and mental illness, and you won’t be able to put it down until the last page.

LET ME LIE is out in the UK on March 8th.