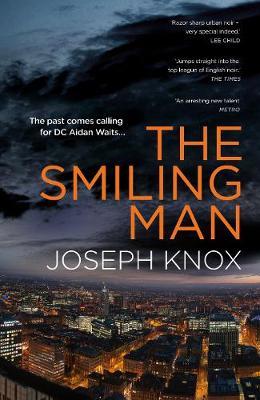 Let me start by saying that I have a little bad habit as a reader: sometimes I read first the second and third book in a series and then, if I like it, I go back and read the first ones (I started reading Harry Potter from the third book because at the time that’s what my local library had). I first heard about Joseph Knox when his debut novel, Sirens, came out and although the reviews were all good, I never got around to read it. But when I started hearing again about this author now that his second book is coming out, I decided that I needed to catch up and I was lucky enough to get my hands on THE SMILING MAN, which can be also read as a stand-alone novel.

The protagonist of the novel and the series is Detective Aidan Waits. He has a history of drug abuse which led him to work the night shift. He had a troubled childhood and he grew  up in foster care. He is emotionally damaged, he can’t keep people close to him and nobody in the book likes him. He is passionate about his job – he risks his career for someone he barely knows because he feels compassion for the victims of crime. I found him reckless and irresponsible, but those are qualities that actually make him good at his job. He is full of flaws and problems, but he tries to right his past. Despite all his imperfections and weaknesses, I really liked the character of Aidan, he is what kept me glued to the page of the novel.

Although the character of Aidan is what captivated me most of THE SMILING MAN, the plot is also gripping and absorbing. Aidan and his partner, DI Peter Sutcliffe, are on their night shift when they are called about a break-in in an abandoned hotel. When they arrive they find the night guard unconscious and the body of a man smiling and sitting in a chair in one of the rooms. The investigation is complicated by the fact that the victim seems to be a ghost. He has no ID, the tags on his clothes have been removed, and he doesn’t have any fingerprints. As Aidan tries to investigate the case without much help from his partner or his colleagues who all seem to hate him, he also has to face someone from his past who doesn’t want to let him go.

THE SMILING MAN is chilling, dark, and intense. The characters are well-drawn and complex and, although I couldn’t stand the character of DI Peter Sutcliffe, I enjoyed his working relationship with Aidan and their sharp and ironic exchanges. The author explores in depth the nightlife of Manchester, where the novel is set, and his attention to details made me feel like I was inside the novel.

I found THE SMILING MAN gripping, captivating, and riveting and now I know that I absolutely have to read Sirens.

Thank you Transworld for providing me with an early copy of the book.

THE SMILING MAN is out in the UK on March 8th.