For his entire life, Charley Sutherland has concealed a magical ability he can’t quite control: he can bring characters from books into the real world. His older brother, Rob – a young lawyer with an utterly normal life – hopes that this strange family secret will disappear with disuse, and he will be discharged from his duty of protecting Charley and the real world from each other.

But then, literary characters start causing trouble in their city, making threats about destroying the world, and for once, it isn’t Charley’s doing. There’s someone else out there who shares his powers and it’s up to Charley and a reluctant Rob to stop them – before anyone gets to The End.

Welcome to my stop on the blog tour for The Unlikely Escape of Uriah Heep, the fantastic new novel by H. G. Parry where the characters of the books come to life.

Imagine if the characters of the book you’re reading could come out? At first, I think I would freak out, but then I would find that having tea with Sherlock Holmes would be an unforgettable experience. Charley Sutherland does that. He has the gift to bring out characters from the books he is reading, often involuntarily and unwillingly. And since Charley spends his days among books, it happens quite often. For his brother Rob, Charley’s gift is more of a curse because he always has to get his younger brother out of trouble and so he finds himself chasing Dickensian characters around the university campus in the middle of the night. Until now, things have been quite under control, but as the characters starts to behave strangely and new worlds appear out of nowhere, Rob and Charley need to stop them before it’s too late.

This is the story of two brothers who are completely different: one is a close-minded lawyer trying to have a normal and undisrupted life, the other lives in a world of books from which he can summon the characters. They couldn’t be more different. And yet, they are both unique and relatable characters. I adored Charley, quiet and always trying to do the right thing. I just wanted to hug him and protect him.

I loved how the author represented the characters that Charlie pulls out of classic novels. Heathcliff, Mr Darcy, Dorian Gray, Sherlock Holmes, Victor Frankenstein, Fagin, Artful Dodger, Charles Dickens, they all make an appearance (and many more) and H. G. Parry made a great job making them as close to the original as possible.

The Unlikely Escape of Uriah Heep is a fun read with suspense, brilliant characters, and an original and beautiful plot that kept me completely glued to the pages.

A huge thank you to Tracy Fenton and Orbit for providing me with a copy of the novel. 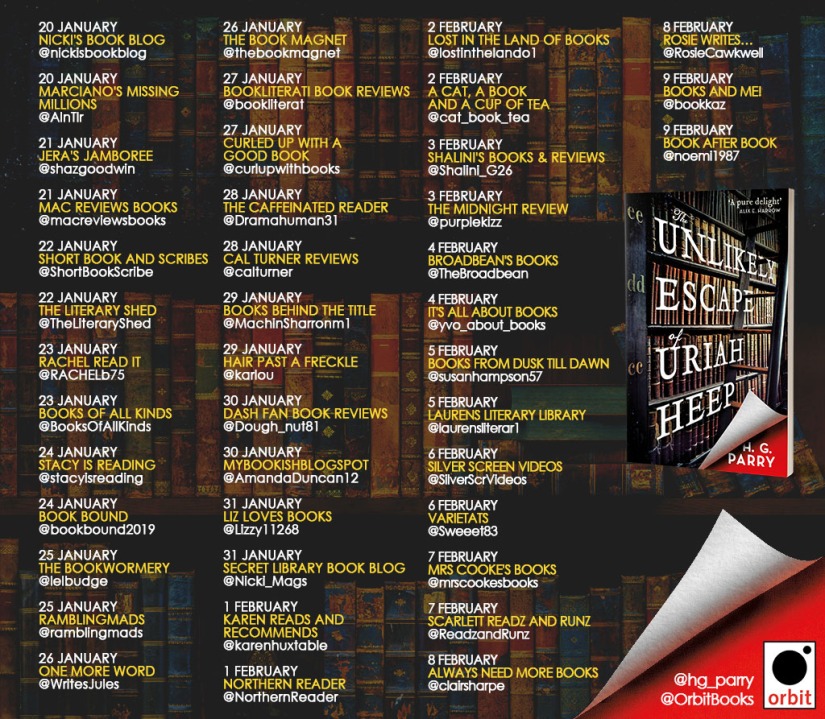 H. G. Parry lives in a book-infested flat in Wellington, New Zealand, which she shares with her sister and two overactive rabbits. She holds a PhD in English literature from Victoria University of Wellington, and teaches English, film and media studies. Her short fiction has appeared in InterGalactic Medicine Show, Daily Science Fiction and small press anthologies. The Unlikely Escape of Uriah Heep is her debut novel.