All Beth has to do is drive her son to his Under-14s away match, watch him play, and bring him home.

Just because she knows that her former best friend lives near the football ground, that doesn’t mean she has to drive past her house and try to catch a glimpse of her. Why would Beth do that, and risk dredging up painful memories? She hasn’t seen Flora Braid for twelve years.

But she can’t resist. She parks outside Flora’s house and watches from across the road as Flora and her children, Thomas and Emily, step out of the car. Except…

Flora looks the same, only older – just as Beth would have expected. It’s the children that are the problem. Twelve years ago, Thomas and Emily Braid were five and three years old. Today, they look precisely as they did then. They are still five and three. They are Thomas and Emily without a doubt – Beth hears Flora call them by their names – but they haven’t changed at all.
They are no taller, no older.

Why haven’t they grown?

Happy publication day to Sophie Hannah and welcome to my stop on the blog tour for her new novel, Haven’t They Grown. A huge thank you to Jenny and Hodder & Stoughton for inviting me to join the blog tour and providing me with a copy of the novel.

I have read a few novels by Sophie Hannah and I enjoy her writing style and her well-crafted plots. In this new novel, the mystery to solve is weird, unexpected and very difficult to figure out, at least for me who had to reach the shocking explanation to understand it.

If you discovered that two people you knew when they were children are still the exact same age as twelve years ago would you obsess about it and try to find out the truth like Beth does or would you let it go as her husband Dom suggests? The Leesons and the Bairds used to spend a lot of time together, going to dinners and holidays together, but then something happened and Beth and Flora, best friends since university, haven’t spoken since. When Beth Leeson sees Thomas and Emily Baird for the first time in years it’s like they are frozen in time. The last time she saw them, they were children, aged 5 and 3. Now, twelve years later, they are still 5 and 3. What is going on?

The characters are diverse and well-developed, although not always likable. My favourite was Zannah, Beth’s sixteen-year-old daughter. She is smart, fun, resourceful, and refreshing.

The plot is unbelievable!!! Full of twists and suspense, Haven’t They Grown is a thrilling and complex story about obsession and a mystery that borders to sci-fi (at some point, I thought the kids had been cloned for lack of another explanation) that will completely keep you glued to the pages.

Haven’t They Grown is a tense and gripping domestic thriller that will make you question everything you read: did Beth really see two children who haven’t grown up? Is Flora really in America with her husband or is she in England with a brand new family? What happened between Beth and Flora that they haven’t spoken in twelve years? And on and on and on.

Sophie Hannah did it again and created a brilliant and twisted thriller that it was very difficult to put down! 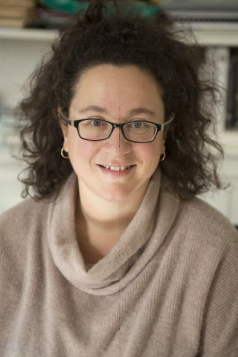 Sophie Hannah is an internationally bestselling crime
fiction writer, translated into 49 languages an published in 51 countries. Her psychological thriller The Carrier won the Specsavers National Book Award for Crime Thriller of the Year in 2013. Sophie is the author of the bestselling Poirot continuation mysteries. The Point of Rescue and The Other Half Lives have been adapted for television as Case Sensitive, starring Olivia Williams and Darren Boyd. Sophie is also a bestselling poet who has been shortlisted for the TS Eliot award. Her poetry is studied at GCSE and A-level. Sophie is an Honorary Fellow of Lucy Cavendish College, Cambridge. She lives in Cambridge with her family.