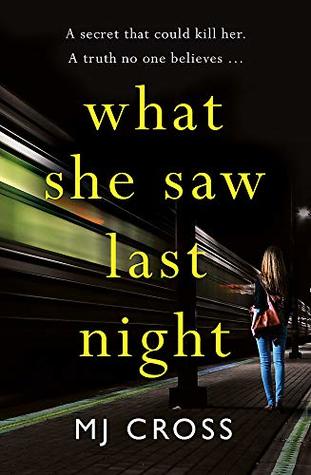 A secret that could kill her.

A truth no one believes…

Jenny Bowen is going home. Boarding the Caledonian Sleeper, all she wants to do is forget about her upcoming divorce and relax on the ten-hour journey through the night.

In her search for her cabin, Jenny helps a panicked woman with a young girl she assumes to be her daughter. Then she finds her compartment and falls straight to sleep.

Waking in the night, Jenny discovers the woman dead in her cabin … but there’s no sign of the little girl. The train company have no record of a child being booked on the train, and CCTV shows the dead woman boarding alone.

The police don’t believe Jenny, and soon she tries to put the incident out of her head and tells herself that everyone else is right: she must have imagined the little girl.

But deep down, she knows that isn’t the truth.

Welcome to my stop on the blog tour for What She Saw Last Night, the suspenseful latest novel by MJ Cross. A huge thank you to Tracy Fenton for inviting me to join the blog tour and Orion for providing me with a copy of this brilliant novel.

Even though I had heard of MJ Cross before (he has written novels under the name Mason Cross), I never read any of his novels, so, when I was invited to join the blog tour, I accepted right away because I was really curious about this author and I was intrigued by the plot and I wasn’t disappointed.

Jenny Bowen hasn’t had an easy year. Her father died, her husband had an affair and they are now divorcing, and now she is running to catch the night-train to travel to Scotland to take care of the house that her father left her. On the train, she crosses path with a woman and young girl. Next morning, when Jenny wakes up, she finds the lifeless body of the woman, but there is no trace of the young girl. Except for detective Mike Fletcher, no one else believes Jenny. There is no trace of the young girl on the train, on the passenger list, or the CCTV at the train station. For the police, it’s a simple case of overdose and they are ready to close the case. However, detective Mike Fletcher believes Jenny’s story and they start their own investigation that brings them back to London and on the path of a dangerous man.

Thanks to Agatha Christie’s Murder on the Orient Express, when I read “train” and “murder” together I am quickly intrigued. I find mysteries set on trains very suspenseful and captivating. With echoes of Agatha Christie’s novels and Alfred Hitchcock’s movies, MJ Cross created a gripping plot set on the Caledonian Sleeper, a night train that travels from London to Scotland every night. Trains are not an easy place where to set a murder because you can find yourself in the middle of nowhere with no escape route and you can be easily caught. In What She Saw Last Night, MJ Cross presents us a woman found dead in her cabin, a witness swearing she was accompanied from a child, and no trace of said child. Did Jenny’s last months finally caught up with her and she imagined the young girl? Or is she right and that young girl is now in danger? And why has no one else seen her?

I loved the plot, I loved the protagonist and her determination in finding out the truth, no matter the cost, I loved the setting and the dark atmosphere. What She Saw Last Night is a compulsive and thrilling story full of twists and shocking surprises and kept me glued to the pages until the very end.