When a faceless body is found floating in the river on a summer’s morning, Detective Kay Hunter and her team are tasked with finding out the man’s identity – and where he came from.

The investigation takes a sinister turn when an abandoned boat is found, covered in blood stains and containing a child’s belongings.

Under mounting pressure from a distraught family and an unforgiving media, the police are in a race against time – but they have no leads, and no motive for the events that have taken place.

Will Kay be able to find a ruthless killer and a missing child before it’s too late?

Cradle to Grave is the eighth book in the Detective Kay Hunter series by USA Today bestselling author Rachel Amphlett, and perfect for fans of Ann Cleeves, Peter Robinson and Ian Rankin.

As usual I am late to the party and I didn’t know about Rachel Amphlett’s thrilling series until now (better late than never!). I really need to thank Tracy Fenton for inviting me to join the blog tour and introduced me to this amazing author. Of course, starting a series from the eight book is not ideal, but it can easily be read as a stand-alone and I am excited to go and read the first seven books.

A beautiful day fishing between a father and a son doesn’t turn out as well as they hoped when they find a mutilated body in the lake. Detective Kay Hunter and her team are called to investigate, but nothing is what it seems in this case and the twists and revelations just keep coming.

I loved the characters of these novel. Kay and her colleagues Carys, Barnes, and Gavin feel realistic and authentic. I enjoyed seeing them together, their easy banter and humour, and the close relationship between the members of the team. They show their emotions and their weaknesses and it’s not just business as the author shows us glimpses of their personal lives that make them more relatable and interesting. I am looking forward to read the first books of the series because I want to learn more about Kay and her past, which is briefly mentioned here and there during the story and which made me very curious about this character.

The plot is twisty and self-paced and the tension is always high, especially when a young child gets involved in the mystery. When it seems the police has figure it out, another surprise comes and changes everything. I like the author’s attention to details when it comes to the investigation. It’s not like watching an episode of CSI where the case is solved in a few hours. Here everything is realistic, done according to the rules, there is a procedure for everything and everyone has a role. I found it very informative and intriguing.

Rachel Amplhett is certainly an author I will keep reading and Cradle to Grave is an engrossing and intense read, full of secrets and, at times, emotional, an absolute must-read! 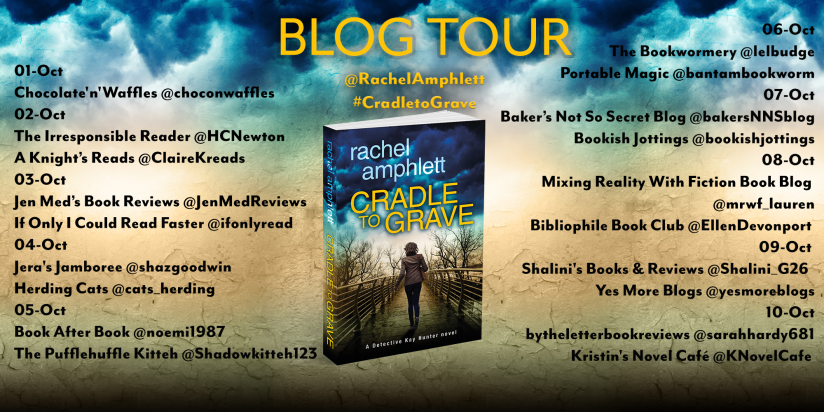 Before turning to writing, USA Today bestselling author Rachel Amphlett played guitar in bands, worked as a TV and film extra, dabbled in radio as a presenter and freelance producer for the BBC, and worked in publishing as a sub-editor and editorial assistant.

She now wields a pen instead of a plectrum and writes crime fiction and spy novels, including the fast paced Dan Taylor and English Assassins espionage novels, and the Detective Kay Hunter British murder mystery series.

After 13 years in Australia, Rachel has returned to the UK and is now based in the picturesque county of Dorset.

She’s a member of International Thriller Writers and the Crime Writers Association, with the Italian foreign rights for her debut novel, White Gold sold to Fanucci Editore’s TIMECrime imprint, and the first four books in the Dan Taylor espionage series contracted to Germany’s Luzifer Verlag.