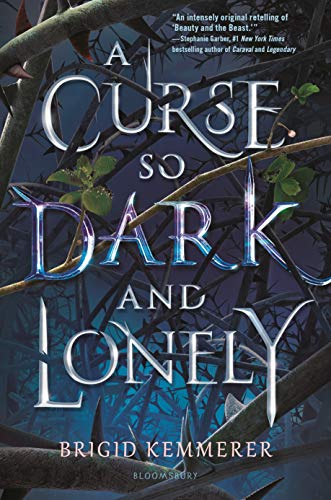 Prince Rhen, the heir to Emberfall, is cursed. Forced to repeat the autumn of his eighteenth year over and over, he can only be freed by love. But at the end of each autumn he is transformed into a beast hell-bent on destruction, and after so many failed attempts, his kingdom and its people are barely holding on.

Harper’s life has never been easy, but she’s learned to be tough enough to survive. She won’t let anything hold her back, not her cerebral palsy or her mother’s deteriorating health. But when she is sucked into Rhen’s world, nothing is as it seems. Powerful forces are standing against Emberfalll … and it will take more than a broken curse to save it from utter ruin.

Recently, I have been reading a lot of fantasy novels and I have discovered many brilliant authors who took me in magical worlds and who I wish I had read earlier. I loved the novels I have read so far, but there are a couple that have completely captured me. A Curse So Dark and Lonely is one of them. Everyone was raving about it so I caved in and bought a copy. I fell in love with the engaging and brilliant characters, the gripping and superb plot, and the author’s clear and beautiful writing style that made it impossible to put the book down. I found myself completely immersed in the world of Emberfall and its inhabitants and I didn’t want to end. I can’t wait to see what happens in the sequel, A Heart So Fierce and Broken, which is out in January.

The plot reminds me of the story of The Beauty and The Beasty and yet it is original and unpredictable. There is a magical reign to protect, a curse to break, a monster to kill, and two powerful women to defeat. Do you want more? The main characters are simply fantastic. The heroine, Harper, doesn’t let her physical disabilities get in the way. After defending a woman being kidnapped in the streets of Washington DC, she finds herself in a different world and newly appointed Princess of Disi. Brave and fierce, she climbs down windows to protect strangers from dangerous men and to feed the poors. She is funny and altruistic, a contrast to Rhen’s darkness and guilt. Rhen is the heir of the reign of Emberfall. He is arrogant and entitled, but also generous and protective and I loved him. And then there is Commander Grey. He is the only one left to protect Prince Rhen. He is loyal, skilled, honest, but also mysterious and I am really looking forward to reading more about him in the sequel.

I finished reading A Curse So Dark and Lonely a few days ago and I am still thinking about it. It is almost 500 pages long and I devoured in two days, missing bus stops during my commute to work and staying up very late at night to finish it, but it was completely worth it. So, go and buy a copy of this unforgettable novel while I am left to count down the days until I get my hands on the sequel and I can read more about Harper, Rhen, and Grey.

5 thoughts on “#BookReview: A CURSE SO DARK AND LONELY by Brigid Kemmerer @BrigidKemmerer @KidsBloomsbury @TheEmilyRose #Cursebreaker”