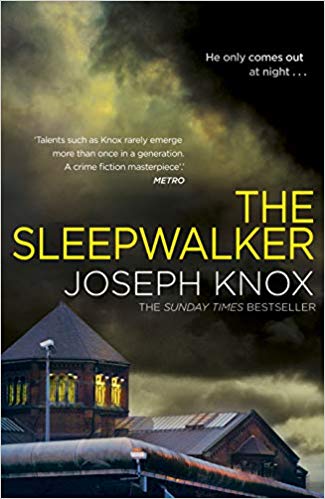 ‘He said he didn’t remember killing them…’

As a series of rolling blackouts plunge the city into darkness, Detective Aidan Waits sits on an abandoned hospital ward, watching a mass murderer slowly die. Transferred from his usual night shift duties and onto protective custody, he has just one job…

To extract the location of Martin Wick’s final victim before the notorious mass murderer passes away.

Wick has spent over a decade in prison, in near-total silence, having confessed to an unspeakable crime that shocked the nation and earned him the nickname of The Sleepwalker.

But when a daring premeditated attack leaves one police officer dead and another one fighting for his life, Wick’s whispered last words will send Waits on a journey into the heart of darkness…

Manipulated by a reticent psychopath from his past, and under investigation from his new partner, Detective Constable Naomi Black, Waits realises too late that a remorseless contract killer is at work.

Can Aidan Waits solve his last case before fleeing justice?

Or will his name be next on the hit list?

When I saw THE SLEEPWALKER on NetGalley I requested it right away and I started reading it as soon as it landed on my kindle. I have been waiting more than a year for a new Aidan Waits novel and I found myself engrossed from the first page.

DS Aidan Waits and his sarcastic partner DI Peter Sutcliffe have a very dull and monotonous job to do: they have to babysit a serial killer who is slowly dying hoping that he confesses the place where he hid the body of one of his victims. Obviously, things don’t go as expected and soon Aidan finds himself once again manipulated by his boss and hunting a killer. In the meantime, he is also partnered with a new detective against his wishes, he is blackmailed by a colleague, and one of the most powerful drug dealers of the city wants him dead… As you can see, THE SLEEPWALKER is far from boring!

I do love the character of Aidan Waits. He is so complex and well-developed and, in this third novel, he is darker and more troubled than ever, living a dangerous life that kept me on the edge of my seat for more than three hundred pages wondering if he would make it out alive this time. I wish there had been more of the engaging and witty exchanges between Aidan and his partner Sutty that kept me entertained in the previous novels, but the arrival of Aidan’s new partner is a nice change. Detective Naomi Black is bright, stubborn, and brave. Her relationship with Aidan is far from easy and they are often at odds on how to lead the investigation, but, no matter how many times Aidan tries to get rid of her, she never backs down and I really liked her.

The Manchester described by Joseph Knox is gloomy and dangerous, the perfect setting for a story of secrets, betrayal, and violence. There is a shocking and dramatic ending that I didn’t see coming and I had to read it twice to be sure I read correctly.

THE SLEEPWALKER can easily be read as a stand-alone (although I highly recommend you read Sirens and The Smiling Man because they are brilliant) and it’s compulsive, gritty, and carefully plotted. I am really addicted to this series and I am really hoping for book number 4!

A huge thank you Transworld Books for providing me with a copy of this addictive novel which is out next week.