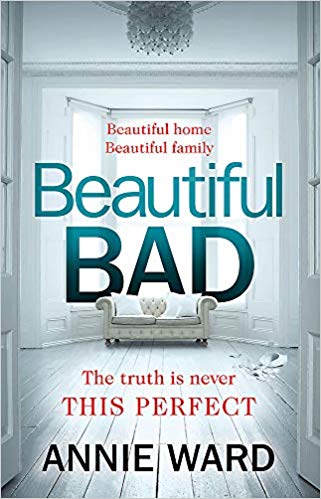 Maddie and Ian’s romance began when he was serving in the British Army and she was a travel writer visiting her best friend Jo in Europe. Now sixteen years later, married with a beautiful son, Charlie, they are living the perfect suburban life in Middle America.

But when an accident leaves Maddie badly scarred, she begins attending therapy, where she gradually reveals her fears about Ian’s PTSD; her concerns for the safety of their young son Charlie; and the couple’s tangled and tumultuous past with Jo.

From the Balkans to England, Iraq to Manhattan, and finally to an ordinary family home in Kansas, the years of love and fear, adventure and suspicion culminate in The Day of the Killing, when a frantic 911 call summons the police to the scene of shocking crime.

But what in this beautiful home has gone so terribly bad?

BEAUTIFUL BAD is a domestic thriller, twisty, brilliant, and beautifully-written. It’s the story of Maddie and Ian, how they met, fell in love, got married, and had a child, until one night the police is called to their house. The house is in the dark, there is blood, signs of struggle, and probably a child is involved, but what really happened in this seemingly perfect suburban house? To find out, the reader is taken back in time and space, in 2001, in East Europe where a young Maddie is an American writer, journalist, and teacher living in Bulgaria and often travelling to Macedonia to visit her friend Jo, a relief worker. It’s through Jo that Maddie meets Ian, an English bodyguard. From the beginning, their relationship is very complicated and we see them travel around the world until they finally settle in a small town in Kansas with their young son Charlie. However, their lives are far from perfect, Ian in often away for work and Maddie suffers from anxieties that lead her to seek for the help of a psychiatric.

Annie Ward is definitely an author to watch. She created very multi-layered characters and she is also very good at portraying them as real people with their flaws and their psychological and emotional problems. You can almost feel Maddie’s fears and inquietude and Ian’s paranoia that it often made for an heartbreaking read. Ian and Maddie are also dark and complex and, even though the story is told mostly from Maddie’s point of view, she remains a mystery until the very last page.

With an explosive beginning, a shocking ending, and many twists along the way, BEAUTIFUL BAD made me hold my breath many times. The novel is completely unpredictable and the different timelines and perspectives kept me on the edge of my seat the whole time. BEAUTIFUL BAD is a gripping, haunting, carefully-plotted, and tragic story about friendship, about love, and about trauma that will move you, intrigue you, and captivate you all at the same time.