So when the girl next door, sixteen-year-old Clare Edwards, is found murdered, Jane knows she must first protect her family.

Every marriage has a few white lies and hers is no exception. Jane’s worked hard to cover up her dark secret from all those years ago – and she’ll do anything to keep it hidden…

After a fantastic debut novel, Phoebe Morgan is back with another twisty story that kept me captivated from the first to the last page. She holds the attention of the readers thanks to the different points of views, the gripping and dark plot, and the multi-layered and realistic characters that keep the tension always high.

Welcome to Ashdon where mothers gossip at the school gate, husbands mow the garden, and nothing bad ever happens… until 16-year-old Clare Edwards is found murdered. But who would kill a young and innocent girl? We found out through the narrative of the three protagonists.

Clare is the typical teenager, popular at school, beautiful, with high grades, and always on her cell phone. But Clare is also hiding a few secrets, a family secret that makes her anxious and scared and that makes difficult her relationship with her mother and her stepfather, and she is also exchanging texts with a mysterious man. So what did get her killed? Clare’s point of view was emotional and suspenseful at the same time. Emotional because you read about this young girl who, despite a difficult situation at home, is happy and excited for something that it’s about to happen, and yet you know that it’s going to end badly, that she will be murdered which adds tension to her story.

On the outside, Jane Goodwin has a perfect life. Three beautiful children, a husband who is the local GP, handsome, charming, all the women in town in love with him and jealous of Jane. Jane likes to show off her family and their wealth, being the perfect wife, the perfect mother, no matter what happens behind closed doors. She lives next door to Clare and her family and as the police investigate and journalists camp outside her house, Jane knows that she has to do everything she can to protect her perfect life. Jane’s character was the most difficult to figure out. She appears cold and distant while at the same time being a loving mother and wife and you don’t know what to make of her until the final shocking revelation.

DS Madeline Shaw arrived at Ashdon two years ago. We don’t know much about her personal life, but she is good at her job and she is determined to seek justice for Clare and, while her boss wants to close the case quickly, she tries to figure out how much of the local gossip is true and what Clare’s family is hiding.

THE GIRL NEXT DOOR is a riveting, thrilling, and well-written novel about how gossip and lies can be destructive, about the lenght people will go to protect their secrets and it kept me completely engrossed and I’d like to thank Lucy Richardson and HQ for inviting me to take part in the blog tour. 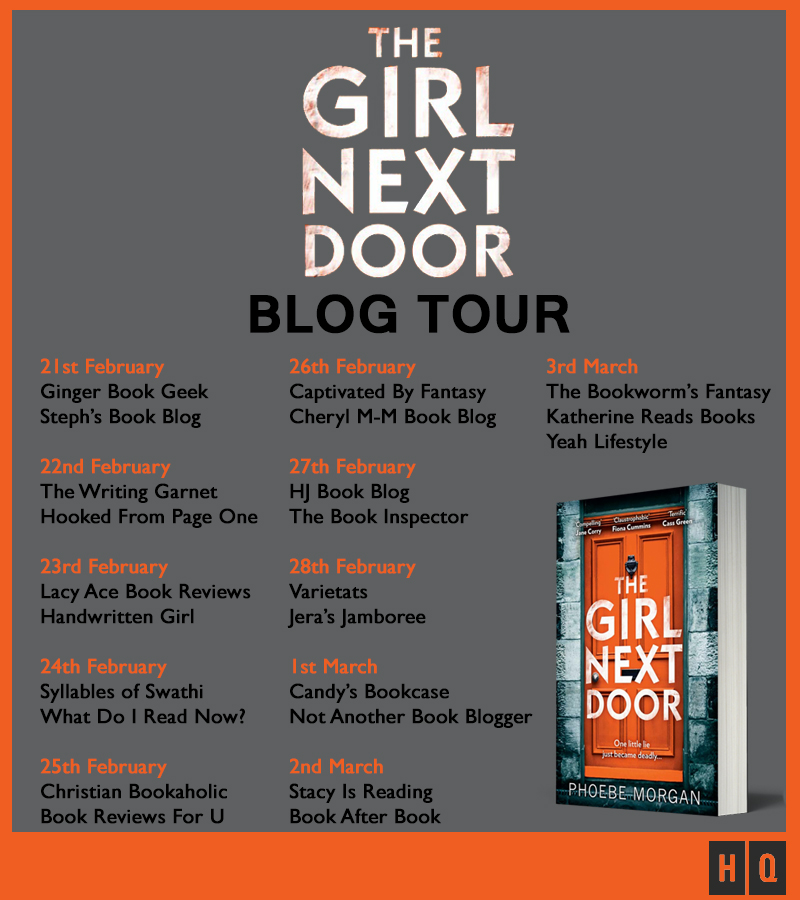 2 thoughts on “#BlogTour: THE GIRL NEXT DOOR by Phoebe Morgan @Phoebe_A_Morgan @HQStories @bookbellereads”