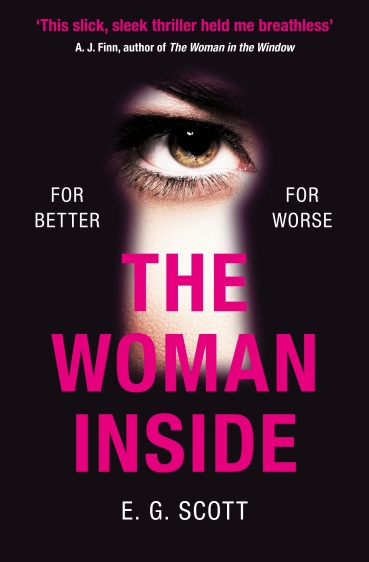 Rebecca didn’t know love was possible until she met Paul, a man with a past as dark as her own. Their demons drew them together, but twenty years later, the damage and secrets that ignited their love begin to consume their marriage.

When Paul catches the attention of the police after two women go missing, Rebecca discovers his elaborate plot to build a new life without her. And though Rebecca is quickly spiralling out of control, it doesn’t stop her from coming up with her own devastating plan for revenge… they made a promise to each other, afterall.

Til death do they part.

Happy publication day to E. G. Scott, the pseudonym for two NYC-based writers, one a publishing professional and one a screenwriter, and welcome to my stop for the blog tour of THE WOMAN INSIDE. This is an addictive and sinister novel and I’d like to thank Tracy Fenton and Trapeze Books for inviting me to take part in the blog tour and for providing me with a copy of this brilliant book.

Rebecca and Paul have been married for twenty years, they seem to be deeply in love with each other, but they both are keeping secrets from each other. As two women linked to them go missing and two detectives start getting really interested in their lives, Paul and Rebecca know that the lies they have been telling could destroy both of them.

The characters are very well-drawn. There are the two detectives who, with their witty exchanges and their jokes, give an humorous feeling to the story. On the other hand, there is the psychopathic mistress who gave me the chills with her obsession and her sneaking-ins. And then there are the two protagonists. Rebecca and Paul are flawed, often not very likable, and they are unreliable narrators (and I do love unreliable narrators). They have great jobs, a fantastic house, the perfect life. However, they manage to ruin everything with their lies and deceit. Paul’s need to prove that he is a virile and important man, the master of the universe, led him to have a mistress, a locked drawer full of secrets, a friend who covers for him when he lies to his wife. Rebecca also has her own secrets and she has an increasing addiction to pills that make her more and more paranoid.

THE WOMAN INSIDE is unpredictable, unbelievable, and claustrophobic. Character-driven and full of twists and drama, this is a domestic thriller with capital letters about murder, infidelity, jealousies, and deceit that make you question: how well do you know the person you’ve been married to for twenty years?

E. G. Scott is a pseudonym for two NYC-based writers, one a publishing professional and one a screenwriter.