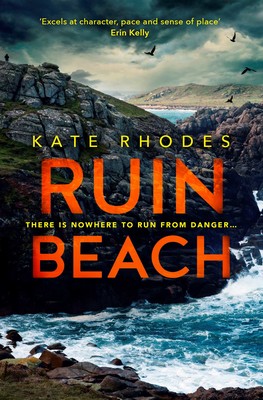 THE ISLAND OF TRESCO HOLDS A DARK SECRET SOMEONE WILL KILL TO PROTECT.

Ben Kitto has become the Scilly Isles’ Deputy Chief of Police. As the island’s lazy summer takes hold, he finds himself missing the excitement of the murder squad in London. But when the body of professional diver Jude Trellon is discovered, anchored to the rocks of a nearby cave, his investigative skills are once again needed.

At first it appears that the young woman’s death was a tragic accident, but when evidence is found that suggests otherwise, the islanders close ranks. With even those closest to the victim refusing to talk, it seems that plenty of people might have had reason to harm her. As the islanders remain guarded, Ben Kitto suspects a killer is on the loose in Tresco.

Everyone is a suspect.
Nobody is safe.

We first meet DI Ben Kitto in Hell Bay. After the death of his partner, Ben took a break from solving murders in London and he moved back to the Scilly Islands to recover. The move was supposed to be temporary, just a few months, but he found himself investigating a murder on the island and, at the end of the novel, he decided to remain in the place where he spent his childhood.

In RUIN BEACH, we find Ben settled down and Deputy Chief of Scilly Island’s Police. He has to investigate the death of Jude Trellon. She was a professional diver and her body was found tied to the rocks by a cave in Piper’s Hole. She was hiding a secret and the people who knew her are not talking. For Ben, everyone on the island is a suspect, even the people he’s known his entire life.

Even though the novel is slow-paced, the author knows how to keep the suspense always high, by adding a second point-of-view alongside the protagonist’s. The story is told mostly in first person by Ben’s point-of-view, but we also read Tom’s story, a young man who knows why Jude was killed. Like Ben, I found myself suspecting of everyone involved in the story. You never know who is telling the truth, who is keeping secrets, who you can trust.

I really like the character of Ben Kitto. I enjoyed reading his interactions with his sidekick Eddie, an enthusiastic young officer, with his dog Shadow, and with his friend Zoe, for whom he has a huge crush. He is well-developed, vividly-drawn and likable and I look forward to read more about him.

What I really love about this novel is the setting. The Isles of Scilly are the real protagonists of the novel. They are just off the coast of Cornwall and they are beautiful and atmospheric and they come to life thanks to the author’s attention to details.

RUIN BEACH is evocative, chilling, and engrossing, an excellent second book in a brilliant series and I’d like to thank Simon and Schuster for providing me with a copy of the book.