PI Varg Veum receives a surprise visit in his office from a woman who introduces herself as his half-sister,
and she has a job for him. Her god-daughter, a nineteen-year-old trainee nurse from Haugesund, moved from her bedsit in Bergen two weeks ago. Since then no one has heard anything from her. She didn’t leave an address. She doesn’t answer her phone. And the police refuse to take her case seriously.

Veum’s investigation uncovers a series of carefully covered-up crimes and pent-up hatreds, and the trail
leads to a gang of extreme bikers and to a shadowy group, whose dark actions are hidden by the anonymity of the Internet. And then things get personal…

I’d like to start by thanking Anne Cater and Orenda Books not only for providing me with a copy of the book and for inviting me to take part in the blog tour, but also for introducing me to the novels of Norwegian author Gunnar Staalesen. I am still finding my way in the Nordic novels and I am always happy to discover new authors.

The protagonist of the novel is Varg Veum, a private investigator who would have never thought that the first time he met his half-sister Norma would be when she asked him to find her goddaughter Emma, a nineteen-year-old girl who disappeared without leaving any trace. I don’t know if I was more engrossed in Varg Veum’s family drama or the case he was investigating. Sometimes, the two stories are separated, sometimes they merge as Varg tries to discover who is involved in Emma’s disappearance. At the beginning, this seems to be just the case of a young woman who ran off because of the complicated relationship with her estranged father and her drug-addict mother. But as Varg delves deeper into the case, he brings to light a much darker truth than just a complicated family, often at the risk of his life and the people he loves.

The novel is not fast-paced, but the surprises, the revelations (not only about the case, but also about Varg’s family and past) are enough to keep the tension high and keep you glued to the page. The characters are well-developed and I especially liked the character of Varg. I found him realistic, smart, calm, and he knows how to get people to talk even when they don’t want to. The dark, evocative Norwegian setting is suitable for the novel, the perfect frame for the crimes at the center of the story.

The only problem that I had with this novel is that I had some difficulty remembering the names of the characters because I am not familiar with the Norwegian language. But that’s only a small personal glitch, and I will be recommending everyone to read this thrilling, dark, entertaining novel. 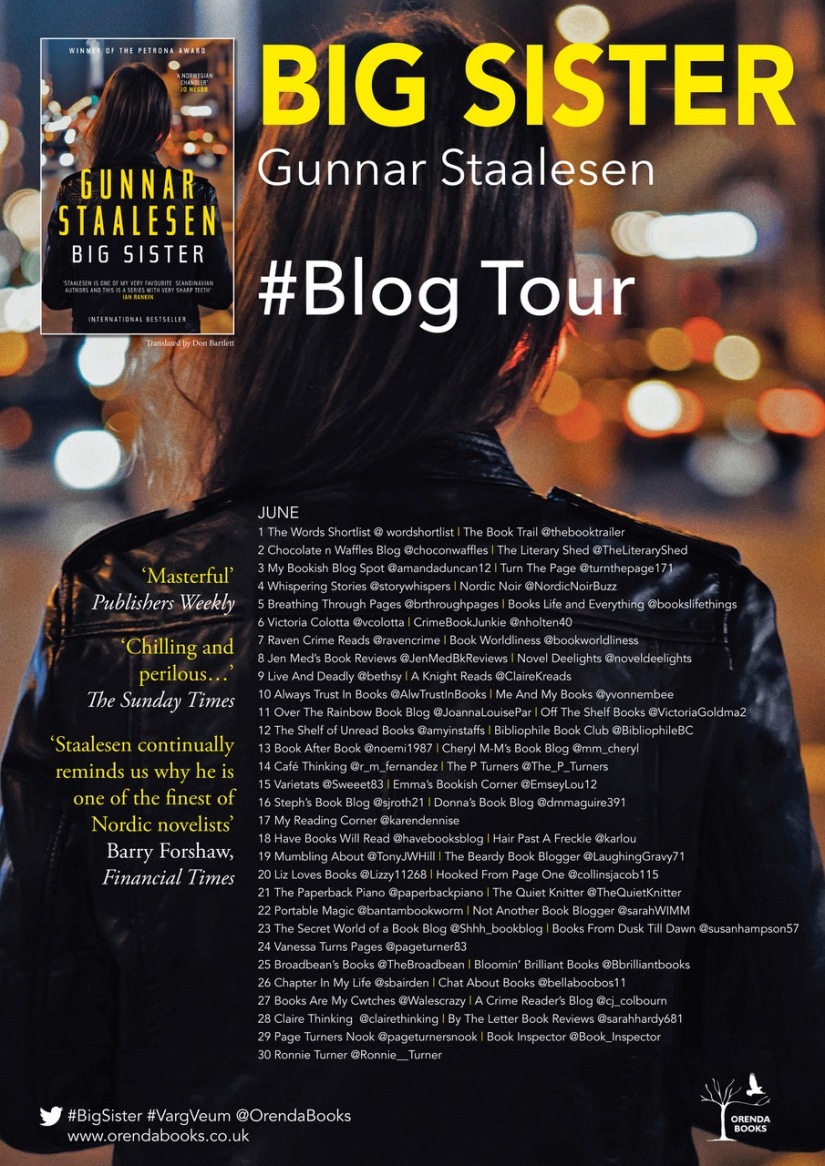 Gunnar Staalesen was born in Bergen, Norway in 1947. He made his debut at
the age of 22 with Seasons of Innocence and in 1977 he published the first book
in the Varg Veum series. He is the author of over 20 titles, which have been
published in 24 countries and sold over five million copies. Twelve film
adaptations of his Varg Veum crime novels have appeared since 2007, starring
the popular Norwegian actor Trond Epsen Seim, and a further series is being
filmed now. Staalesen, who has won three Golden Pistols (including the Prize of
Honour) and the Petrona Award, and been shortlisted for the CWA Dagger, lives
in Bergen with his wife.