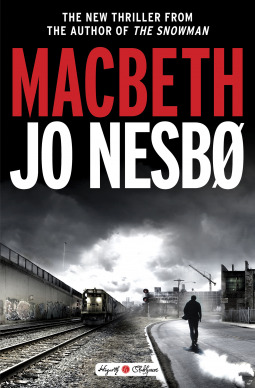 I am still new to Jo Nesbo’s novels, I just read a couple of them, but I love his writing and his well-developed characters. Macbeth is one of my favorite Shakespeare’s plays so I have been looking forward to read this and I’d like to thank Vintage Books for providing me with a proof copy of this modern retelling of the 400-year-old play.

The novel is set sometimes in the 1970s, in a town without a name, a town nobody leaves, a corrupted town where crime is high. The previous Chief Commissioner was a man in the hands of drug lords who let the town fall into chaos, but now Duncan is the new Chief Commissioner. He is a visionary, an idealistic who promises to end the war on drug by capturing the most powerful criminal in town, Hecate. At his side there are the loyal Malcolm, Duff, Inspector of the Narco Unit who dreams of becoming the Head of the Organised Crime Unit, and Macbeth, head of the SWAT team.

Macbeth comes from the poorest side of town, he grew up in an orphanage, and he is an ex drug-addict. Despite this, Duncan decides to promote him as Head of the Organised Crime Unit. And when Strega, a witch sent by Hecate, prophesizes him that he will become Chief Commissioner, Macbeth and Lady (who is the owner of the Inverness Casino) come up with a plan to get rid of Duncan and help Macbeth’s raise to the top.

I really couldn’t put this book down!!! I stayed up late at night reading and I am still thinking about it, days after I finished it. All the characters from the Shakespeare’s play are in the book, sometimes with different names (Macduff becomes Duff) and Jo Nesbo did a fantastic job in creating complex and vivid characters. They are all corrupted, but I couldn’t help liking them at some point or other throughout the novel. Duff is driven by his ambition to become powerful and Lady (who had a very troubled childhood) sees power as a tool for survival. Macbeth is the best-crafted character. Jo Nesbo follows the original storyline of the play, but until the end I couldn’t help but hope for redemption and salvation for Macbeth. It’s fascinating to watch Macbeth become a ruthless and reckless man who doesn’t stop at anything to get what he wants. But he has also a more human side, a side that doesn’t let innocent people die, a side that it’s not corrupted by drug or by his love for Lady.

Out today, MACBETH is such a superb and riveting novel. Jo Nesbo’s writing is captivating, as usual, and the setting of the novel is very dark and grim, the perfect frame to this world of drug and corruption.