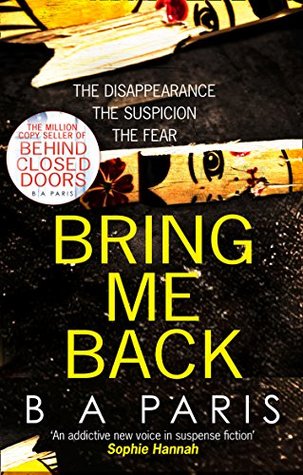 I discovered B. A. Paris at the beginning of last year when I first read The Breakdown, her second novel. I was quickly engrossed in this novel and I found her writing brilliant and captivating. Then I read her debut novel, Behind Closed Doors, another fantastic psychological novel that kept me glued to the pages. So, when, in July, the author announced her third novel I was really excited and, in November, HQ, the author’s English publisher, sent me an early copy (for which I am very very thankful!).

Finn’s girlfriend, Layla, disappeared mysteriously and she was never found. Finn never revealed the complete truth about the night she disappeared and now, twelve years later, he has given up in ever finding her and he is leading a quiet and normal life in a small town just outside of London. He works from home, he walks his dog, and he just got engaged to his girlfriend Ellen who happens to be Layla’s older sister. And it’s right after the engagement is announced on a newspaper that strange things start to happen. First Ellen finds a Russian doll outside their house and then Finn starts receiving emails from someone claiming to know what happened to Layla. And as more Russian dolls appear and more mysterious emails are received, Finn starts to wonder again what happened that night that Layla disappeared.

First of all, the plot is twisty, thought-provoking, and intense. I like the author’s attention to details and descriptions and I found the small-town setting very evocative. The novel is full of suspense and I love the alternation between the past and the present and even between characters which made me turn page after page to see what happens next.

What I loved most about this novel is the author’s descriptions and exploration of the characters’ psychology. Finn’s guilt over what happened to Layla and over his feelings towards Ellen and the characters’ what ifs make the novel more addictive, compelling, and unpredictable.

While I was reading I tried to guess who was sending the emails and the Russian dolls, but there are many unpredictable moments and I was completely taken by surprise by the final shocking revelation – which is always unexpected in this author’s novels.

Carefully plotted, dark, and engrossing, BRING ME BACK is the kind of book you can’t stop reading so I recommend you either take a day off or wait for the weekend or you can do like me and give up on a night of sleep because you won’t be able to put it down.

BRING ME BACK is out on March 8th in the UK.