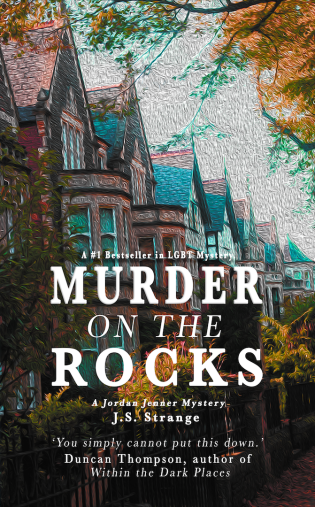 When PI Jordan Jenner returns to work following the death of his mother, his first case involves a murdered writer…

James Fairview has been killed. As a member of a prestigious writing group hosted by bestselling author Joseph Gordon in the heart of Cardiff, Jordan not only has to cope with solving the mystery, but also deal with press attention.

As Jordan investigates, he discovers his mother’s death may not have been so simple. And when another writer is murdered, Jordan realises the killer could strike again…

A murdered writer, a mysterious death, and a group with jealousy at its heart, this is Jenner’s toughest case yet.

A cosy murder mystery with a gay male detective, Murder on the Rocks is the first in the Jordan Jenner Mysteries series. If you’re a fan of classic whodunits you will love this!

A perfect read for those looking for Welsh crime fiction.

Happy Monday, happy new week. I am delighted to kick off the blog tour for MURDER ON THE ROCKS by J. S. Strange, the first thrilling novel in the Jordan Jenner Mysteries. I’d like to thank Emma for inviting me to join the blog tour and providing me with a copy of the novel.

Private detective Jordan Jenner is back at work after the death of his mother and his first case is helping the Cardiff police solving the murder of James Fairview, an aspiring author poisoned during a writing retreat. It seems that everyone in the writing group hated James, but who hated him enough to kill him? And as the case becomes more personal for Jordan, another member of the group disappears…

MURDER ON THE ROCKS is a fantastic first book to a new gripping series. Jordan Jenner is an interesting character. The author made him very realistic, but also complex, with his own problems, troubles, and a complicated and unresolved relationship with his mother. He is smart, funny, and very good at his job, even when his personal and professional life unexpectedly blend.

I liked the author’s writing style. J. S. Strange knows how to keep the reader’s attention and to build up the tension high with a dark atmosphere and twists that took me always by surprise. Everyone in the writing retreat is a potential suspect, everyone has a motive, and I didn’t figure out who the killer was until it was revealed in the end. The novel ends with a fantastic revelation and a little anticipation to the second novel which I am really looking forward to reading!

J.S. Strange is an author from Wales, United Kingdom. He writes crime, mystery and horror. His first novels, published in 2016 and 2017, were set in an apocalyptic London. Murder on the Rocks, is the first in a cozy crime mystery series, featuring a leading gay male detective.

Murder on the Rocks was written by Strange for many reasons. One of those reasons was a lack of representation within the crime genre, particularly with detectives and sleuths. Strange created Jordan Jenner, a private investigator, who lives and works in Cardiff. Murder on the Rocks was written with the intention of shining light on Cardiff, and bringing Cardiff, and furthermore, Wales, into the crime genre.

When Strange doesn’t write, he works in television. He also presents a radio show all about the paranormal. He has an enthusiasm for Britney Spears and cats.