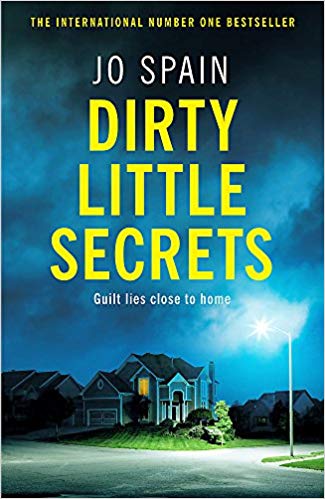 In the exclusive gated community of Withered Vale, people’s lives appear as perfect as their beautifully manicured lawns. Money, success, privilege – the residents have it all. Life is good.

Olive Collins’ dead body has been rotting inside number four for the last three months. Her neighbours say they’re shocked at the discovery but nobody thought to check on her when she vanished from sight.

The police start to ask questions and the seemingly flawless facade begins to crack. Because, when it comes to Olive’s neighbours, it seems each of them has something to hide, something to lose and everything to gain from her death.

If you are a fan of Liane Moriarty’s books, then you are really going to love the new gripping novel by Jo Spain. Set in an exclusive gated community where everyone is hiding something, DIRTY LITTLE SECRETS is a brilliant and twisty novel that I found really hard to put down. This is not a surprise for me because it happens every time I read one of her novels.

There are seven houses in Withered Vale: two families with children, a single mother with her teenage daughter, a retired couple, and two single men. And then there is Olive Collins. In her fifties, single, and retired, Olive has been dead in her house for three months before her neighbours noticed and they did notice only because of the bad smell coming from her house. Frank and Emma are the detectives who are trying to figure out if Olive’s death was an accident or a murder and, as they interview the community, they discover that everyone in Withered Vale wanted Olive gone.

The story is told from the points of views of all the characters in the novel, including Olive who tells her side of the story from the grave (which, by the way, reminded me a lot of Desperate Housewives). Jo Spain created a cast of well-crafted and diverse characters that fit perfectly in the story. Even though they live in close proximity, there is no sense of community between the residents of Withered Vale. They don’t like or trust each other. And I didn’t like some of them, while I cheered on some of the others (especially Alison Daly and her daughter Holly). I loved the characters of Frank and Emma, the detectives investigating Olive’s death. Frank is in his fifties, three months from retirement, and tired of all the bad things he sees in his job. On the other hand, Emma is young, enthusiastic, and eager to prove herself. Together they make an odd pair and their exchanges make an entertaining read.

I was fascinated by the setting of the novel. The community of Withered Vale should be safe with its gates and alarms, but it feels more like a prison and when one of them is found dead, the police doesn’t even think to investigate outside of the community.

DIRTY LITTLE SECRETS kept me completely hooked. I found the story masterfully plotted: with each chapter I read, a new suspect would come up, making it impossible to figure out the killer and I loved the ending which was brilliant and completely unexpected. Chilling, twisty, and captivating, DIRTY LITTLE SECRETS is definitely another must-read from Jo Spain.